In my childhood – all my life, really – the shore was about sand.  Where land met sea, you would find the white of powdery quartz or the orange of crushed shells.   Some were good for dribbled  towers on the featureless shore, and others occasionally offered up sand-dollars or interesting bits of flotsam.

My recent trip to Maine showed me a coastline in rawer form. 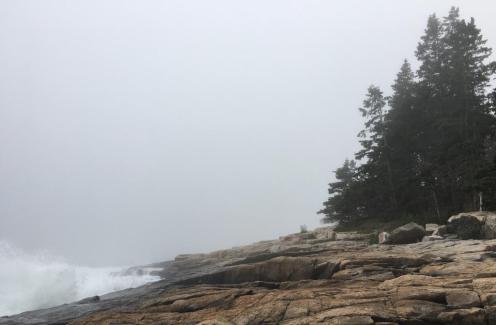 In July I spent a few days on the Schoodic (SKU-dik) Peninsula, where the crashing of the waves sounded like the sighing of wind through my open window at night.  I spent one late afternoon alone on the rocks, watching and listening. Behind me, stunted trees and herbs clung tenaciously to a mantle of dirt only a few inches thick.   Before me,  waves crashed  against the cracked, ancient granite.  It made me think of troops advancing in human waves, charging up the slope before faltering and falling back, only to regroup and charge forth again.

Closer to the huddled vegetation, I saw sharp demarcation in the stone, as a dike of basalt cut through the granite.  A young geologist could have a fine time following the lines of dark stone slashing the open ground of Schoodic, to be fractured and worn down, leaving wide trenches in the harder granite. 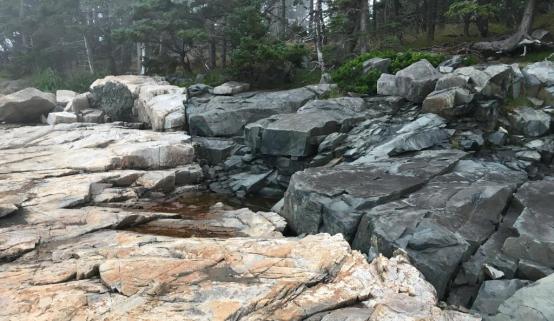 The crashing waves were soothing, but some animal part of me also watched with dread.  This wasn’t the domesticated water of a swimming pool; if given a chance, those powerful, frigid waves would mindlessly sweep you away, break you against stone, rob  you of air, or drain your body of all warmth.   But that’s the way of Nature, isn’t it?  Tornados, volcanoes, cliffside vistas, grizzly bears – we can appreciate the majesty of Nature, but Nature isn’t obliged to return the favor.

I wonder how my thoughts would have turned had there been a horizon for the sun to sink into, and distant islands and coastline to observe.  But the world was confined to a grey dome encompassing spruces, stone, and sea.

On a different day (but no less grey),  my guides drove me far up the coast to a cove south of Machiasport to visit Jasper Beach.  Again, this shoreline was all stone, but stone that had been broken  down and placed in a natural rock tumbler for  a geological moment.  The beach drops down in a series of tiers to the water’s edge, where stones –from  hand-sized cobbles to pebbles smaller than your pinky-nail – are rounded and polished against each other by wave action.   The waves gently rolled in, blunting their power by filling the spaces between billions of stones.  When the water withdraws, the air fills with a sizzling hiss, like a giant rain stick.   It was like a half-mile ASMR trap. I could have spent hours poring over the limitless variety of stones.  Chris Mackowski does more justice to the beach than I can. 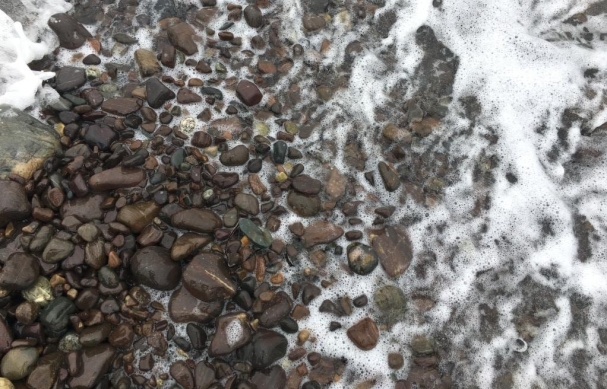 The final stop of the tour was a beach that combined the previous two and added some extra elements.  Quoddy Head State Park is as far up the coast as you can get and still be in the US, and the easternmost point in the US.  The fog broke briefly, and I could just see a bit of Canada.  From the parking area,  I took stairs down the cliff face to the beach.  It sported some cobbles, some bedrock, and some sand – with lots of seaweed mixed in.  There were small columns of rocks here and there, cairns left by visitors.  I didn’t add to them, but understand the impulse.  I stood on a stone surrounded by the lapping low tide, so I could tell friends I was the furthest I could go in the US without swimming.

These beaches were new experiences for me.  I’m back in the late summer roast that is south Georgia.  But as I write this, the recording I made of  the incoming tide making war on Schoodic Point is playing in the background. 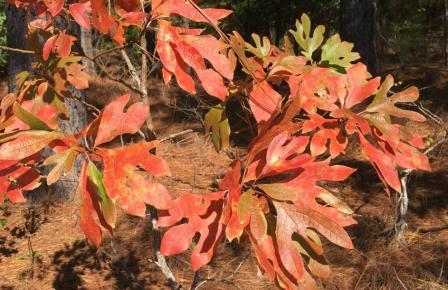 Sassafras (Sassafras albidum) is a small-to-medium tree found from east Texas to Maine.   Called by some the “only native spice of America,” the leaves are dried and ground to make a seasoning, first by the Choctaw and later in Louisiana Creole cuisine — where it is known as filé powder.

Various parts of the plant were long used for medicinal purposes by natives, settlers, and even in recent times.  In the 17th century, it was second only to tobacco as the top export from the Americas, and was used in Europe for scenting perfumes and soaps, and as a cure-all (which, as such things go, severely thinned the species on the landscape).   Sassafras tea, tonics and root beer are still imbibed.  These days there are many claims of health benefits as well as potential risks, and properties vary by season and part of the plant, so do your research before collecting and consuming (It is my understanding that sassafras oil contains carcinogens and its use is restricted by the FDA).

Humans aren’t the only ones to consume sassafras. Various wildlife browse sassafras in limited quantities, but many birds consume the drupes.

These trees rarely get above about 60 feet tall.  However, there is a specimen in Kentucky that measures over 100 feet, with a circumference of 21 feet. 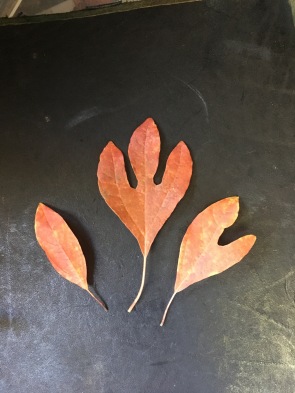 The foliage is particularly interesting.  Each tree, and indeed each branch, will likely have three distinct leaf shapes: single lobed, mitten-shaped double lobed, and triple-lobed.  More striking to me is the bark.  I was shooting the bull with a forester who had an old grey-brown stick in the truck bed.  As we talked I idly picked it up and shaved on it with my pocketknife.  Underneath the nondescript weathered bark was an intense red color, patterned in layers and furrows.  Other specimens range from reddish-brown to orange, and can be somewhat spongy.  I’ve made some well-loved walking sticks from sassafras.

(As a complete aside, I don’t see very many staff-ready sassafras in my wanderings of the local woods.  Most are little more than sprigs before fire, woods clearing or other disturbance kills them.  When I do find them, I generally only cut one if there are already a number of stems in the vicinity.  It’s a way of protecting a species that I’d like to see more of. )

The tree has an exotic fragrance.  I’m not good at describing smells, but I’ve heard it compared to fennel, anise or licorice.  A friend told me that he was digging into a dirt bank one hot afternoon, and he was flagging badly.  His mattock sliced into a sassafras root, and the scent – and the associations it sparked in his memory – revived him.

The Order of Bards, Ovates, and Druids